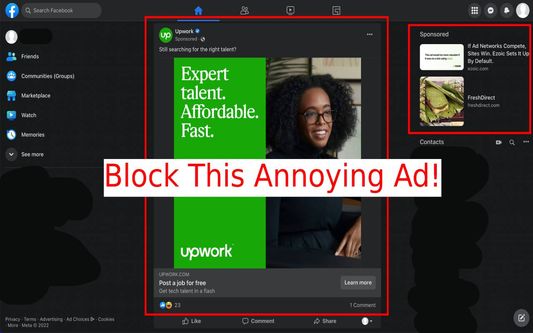 Are you upset about Facebook's tremendous power? Do you want Facebook to stop abusing your attention just to make more money? Is Facebook violating your privacy because they're too greedy?

Then use this free video and image sponsored adblocker! It blocks image- and video-based sponsored posts and sponsored ads from showing up in your Facebook News Feed. This is where 90+% of their revenue comes from.

That's why this extension was created: so that Facebook video and image sponsored ads can once again be blocked easily!

I personally tested these sponsored adblockers and NONE of them are working:
* Ghostery
* Adlock
* Adblock for Facebook
* uBlock Origin
* Fair AdBlocker

The only ones I found to be working were:
* Adguard
* Adblock Plus
* Total Adblock

This ad blocker extension was developed by Programmer Hat

There is a chrome version of this extension. Install the Free Ad Blocker for Facebook™ (Videos and Images)

We are not affiliated, associated, authorized, endorsed by, or in any way officially connected with Facebook.