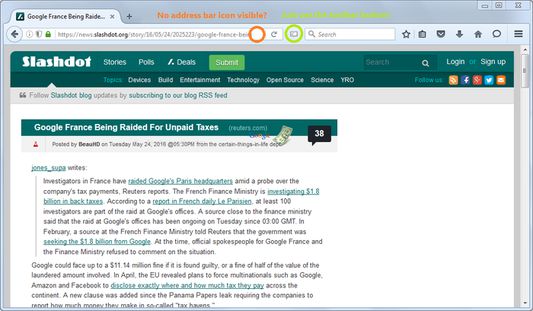 Remark (2019-11-11)
As a user pointed out, setting “reader.parse-on-load.force-enabled” to “true” using the configuration editor will force the icon to be visible as well, without the need to install this add-on.

Remark (2018-06-09)
As the WebExtension API change is still not implemented, this add-on cannot force the Reader View to open. As an alternative, I created a bookmark version of this add-on. One can also manually activate the Reader View by prepending “about:reader?url=” to the current tab’s address.

Remark (2017-11-21)
Starting with Firefox 58 and version 0.1.0 of this add-on, the new WebExtension APIs are being used, making the add-on work in Firefox “Quantum”.
However, right now the new API forbids “forcing” the Reader View to open. See https://bugzil.la/1419520
Users of Firefox 57 Nightly and Developer Edition may set “extensions.legacy.enabled” to true using the configuration editor. Users of Firefox 56 and below may use version 0.0.7 of this add-on.

Remark (2017-09-07)
As Mozilla discontinues its support for all Firefox add-ons except those using the WebExtensions APIs, this add-on in its current version 0.0.7 will become unusable with Firefox 57 (“Quantum”). This widely criticized measure, although regarded as necessary by Mozilla, will lead to many broken add-ons. They may remain unfixed because the required features are not possible with the new APIs or because the developers decide to not fix them (see this statement by Luís Miguel, this note by Paolo “Kaosmos” or the documentation of the now discontinued “Mozilla Archive Format” (alternative: WebScrapBook or SingleFile)—originally developed for long-time archiving purposes (!)—for example). Other developers may not be aware of the changes and some add-ons have been abandoned a long time ago.
The migration of this add-on currently fails due to a lack of required APIs. That could change over time, the corresponding bug can be found here: http://bugzil.la/1286387

Added white background to icons as per a user's suggestion.