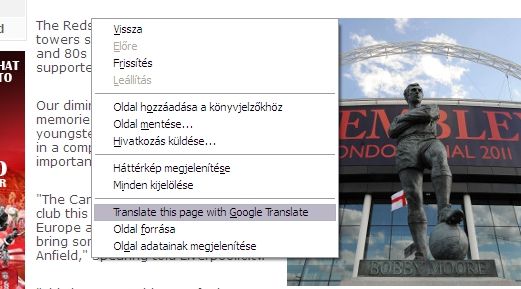 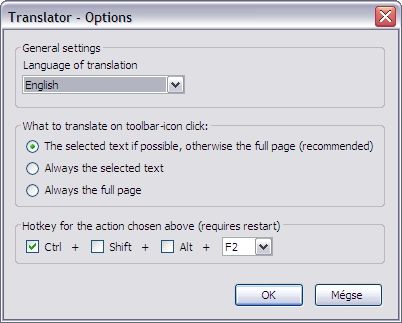 By default, the add-on will try to set your detected language for the default target language. If it is not possible then English will be the target language of the translation.

It's highly recommended to select less text than more, otherwise the translation will take longer to appear. You can select a maximum of 1100-character long text. If you select a longer text, you'll get an alert box in some cases. You shouldn't either select pictures or tables because these will disappear and mystic text will appear there.

Now, let's see, how it works. Firstly, you search something that you don't understand because it's in an other language. Secondly, you select this section or sentence. Now you can go three ways:
- Right-click with the mouse and click on "Translate this text with Google Translate" text.
- Click on the Toolbar icon.
- Press the hot-key.
As soon as the translation-progress starts, the Red T will become green, and as soon as the translation ends, it'd be red again. Within a second or two, you'll see that the selection disappears and a text in your language appears there. That's all.

Or, if you want to translate the full page, you can go with the three ways mentioned above, too.

Options:
you can find this menu if you:
- right-click on the Red T (or before Firefox 57 click on the little arrow next to it) and click "Options"
- go to Add-ons menu and click on configuration of this addon
you can set here:
- what language you want to translate to
- what (and how) to translate when you click on the Red T or press the hot-key
- the Hot-key (only before FF57)
Available target languages: you can translate to every language that you can find on Google Translate page (http://translate.google.com/). If you found a language that isn't in the list of this addon then comment here below.

The language of the original text is automatically detected.


The translations are powered by Google Translate, the addon uses their translator-program.