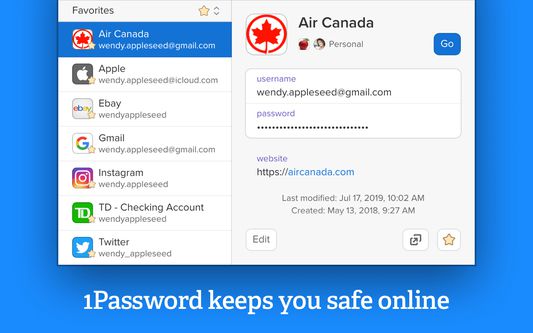 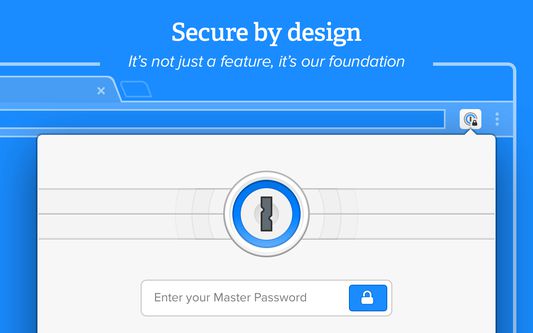 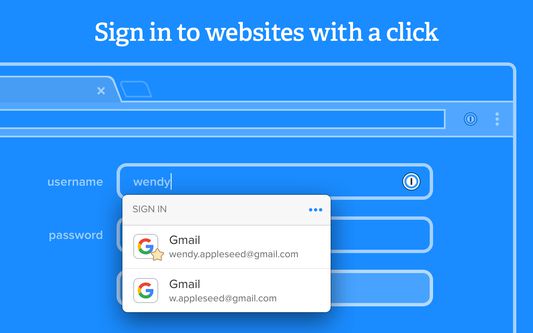 This extension requires a 1Password membership. If you don't have one yet, you can sign up when you install the extension and try one free.

1Password is a password manager that keeps you safe online. You want to use different passwords for every website, but it can be hard to keep track of them all. With 1Password you only ever need to memorize…one password. All your other passwords and important information are protected behind the one password only you know.

1Password manages everything for you: generating, saving, and filling your passwords. Get to know 1Password in your browser:

At 1Password, we believe that the less information we know about you, the better. After all, it is impossible to lose, misuse, or abuse information we don’t have.

We collect only the information necessary to provide our services and assist you in troubleshooting, such what kind of 1Password account you signed up for (including email address), usage information (such as when you log in), and details about your connected devices.

This personally identifiable information is never shared with third parties. It is only ever used to provide you with service and support. You can see our privacy policy for full details.

We believe strongly that your data is yours and we don’t want to know anything about it. This is one of the fundamental beliefs 1Password was built upon.

Your data is your data. We don’t use it, we don’t share it, and we don’t sell it. You’re our customer, not our product.

- The credits page now has a fresh new look. ✨ #2495,#927
- The settings page has been redesigned to be modern and responsive. ✨ !12438
- A placeholder is now shown while custom icons are loaded in the pop-up. #14373
- The pop-up's header has been redesigned with new icons and an updated layout. #12443
- The pop-up is now closed after using the "Change Password" option in Firefox. #12788
- In the pop-up, you can now choose to filter by vault instead of by account. #13045
- In the pop-up, the last item in the item list is no longer cut off. #14844
- In the pop-up, using the Enter key to fill the selected item has been restored. #14913
- Restored the ability for selected text to be copied from the pop-up with Ctrl+C/Cmd-C. #13436
- Using the arrow keys to navigate the item detail view now works more consistently. #14626
- The keyboard shortcuts for opening the category picker and creating items in the pop-up have been restored. #14804
- A notification is now shown for some Teams and Business account owners highlighting some new email preferences available to them. #12216
- Account icons no longer wrap to two lines in the save dialog. #14156
- Account avatars across the extension have been updated. #15244
- Text now fits better within the password generator. #13822,#13844
- Privacy.com has moved from the settings page to the Integrations Hub on 1Password.com. #13809
- Fixed an issue where 1Password would fail to load in Firefox Nightly. !12916
- A consistent one-time password field size is now maintained when the browser loses focus. !12809
- Fixed an issue where the item list position could reset after selecting an item in the pop-up. #13358
- The focus styling of fields in the save dialog has been improved. #14492
- Improved handling of visibility of input fields when collecting web pages. #15152
- Improved the reliability of Open and fill from a desktop app. #15191
- Downloading Collected Page Details from Safari no longer overwrites existing files. #9443,#15041
- Logins are now correctly suggested, saved, and filled on walmart.com, web.telegram.org, churchgiving.com, fialda.com, inovarmais.com, and register.it. !12188
- Logins are now suggested on boxcryptor.com, and one-time passwords now fill in Italian. #14596,#3402
- One-time passwords now fill on Twitter in Norwegian. #14886
- Suggested passwords now fill in both password fields on the vanguard.com recovery page. #14437
- Logins now save and fill correctly on c1c.hu and the change-password page on tickets.theegg.org. #14690, #14676
- Logins now save and fill on myntra.com. #15590
- Logins are now properly suggested on auth.services.adobe.com, id.condenast.com, and cockroachlabs.cloud. #15232, #14818, #14953
- Logins are now suggested on accounts.firefox.com, radio.southcraven.org, ing.com.au, and bank.co-operativebank.co.uk. #15516,#15405,#15431,#14746
- Credit cards are now properly suggested on capitalmedicalclinic.myezyaccess.com. #15290
- Usernames now fill correctly on the French version of app.journalapetitspas.ca. #14819
- Identity items now fill properly on x-kom.pl. #742
- Credit card numbers are no longer filled into the CVV field on amazon.in. #15085