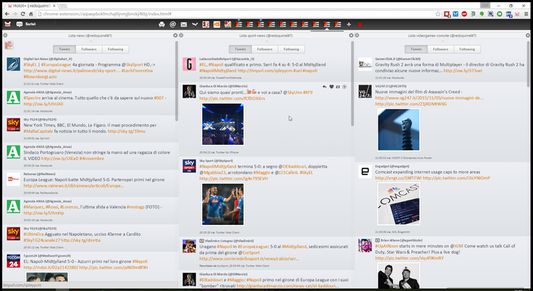 Hotot+ is an unofficial mod of Hotot, the famous and lightweight Twitter client.
Hotot+ has now more than 1000 changes than the original version, divided among (many) bugfixes, improvements and additions of new functions. Starting from v7.0 Hotot+ is now compatible even with Firefox!
A complete and detailed list of new features can be found in the Changelog section of the official website, meanwhile you can enjoy a brief summary of the main news than the old Hotot:

-Now you have to use your own API keys with Hotot Plus. This to avoid write permissions suspensions by Twitter that have battered the client over the past few months.
-Added an initial form to ask the user for his own API keys with instrunctions about how to do it.
-Removed all the limitations, delays and heavy checks introduced in the past few versions to try to avoid write permissions suspensions by Twitter. Since they had no positive result I deleted them to increase again the client performances.
-Increased the tweet limit to 280 characters (note: Twitter could take a few days to apply this new limit to all the accounts, so if you got any error sending tweets please limit them to 140 characters by yourself until Twitter applies the new limit to your account too.)